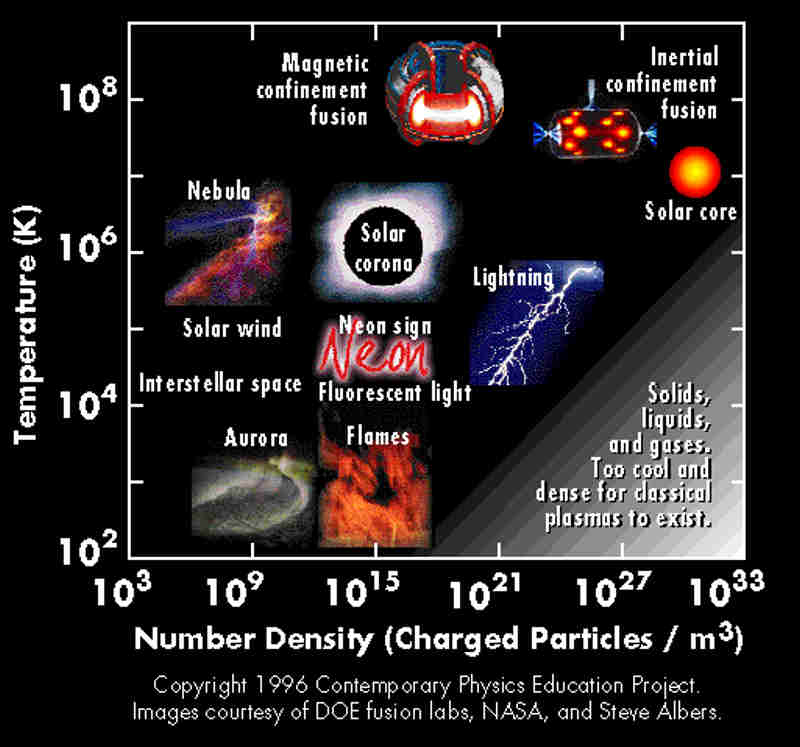 Flames (fire) can be a plasma. Contemporary Physics Education Project

Fire (flames) may contain plasma, albeit one that is a partially ionized plasma, and dominated by collisions:

“Whether a plasma exists in a flame depends on the material being burned and the temperature”.[1]

The Contemporary Physics Education Project produces a poster on plasmas (see right) in which flames (ie. fire) is shown as a plasma.[2]

Any ionized gas cannot be called a plasma, of course; there is always a small degree of ionization in any gas. A useful definition is as follows: A plasma is a quasineutral gas, of charged a neutral particles, which exhibit collective behavior. [3]

He further goes on to describe three parameters that need to be satisfied in order to identify a plasma. These include (1) the plasma approximation (2) Bulk interactions (3) Plasma frequency. In his book, Chen goes on to assess whether certain phenomena are indeed plasma, based on the three parameters, and concludes that a typical flame does indeed meet the criteria of being a plasma.[4]

In practice then, fire is a highly-collisional, partially ionized plasma in which the collisions might mask some of the collective behavior.

“The part of a flame that possesses the well-known properties of an electric plasma is called “flame plasma”, and thus not every type of flame deserves this distinction.”[5]

Professor of astronomy in the Physics and Astronomy Department at Tufts University,[6] Kenneth R. Lang writes:

“A candle flame is a plasma, as are all the stars in the Universe”.[7]

“A negatively charged sphere of a Van de Graaff generator attracts positive ions in the candle flame plasma. Although flame plamsa normally moves upwards in the heated convection stream, it is pulled down towards the sphere as the heavy positive ions are attracted and pull all other components of the flame down with them, including low-density negatively charged components.” (See reference for illustration)[8]

“… there are special types of flame plasmas, such as plasmas in cool flames, or flames at lower pressure, which differ from what is commonly called a flame. [..]
“Another types is the atomic flame, which is produced by an electric discharge. This is known to occur when a glow or arc discharge passes through a gas, whereby dissociation of the gas molecules takes place. In this way, atomic hydrogen, atomic oxygen and atomic nitrogen can be produced. [..] the atomic hydrogen torch was first used for welding. [..] Melting occurs not under the influence of the short arc flame, but due to the recombination of the hydrogen atoms to molecules on the surface, releasing an energy of approximately 100 kcal/mole or 4.5ev. [..]
“Another type of flames plasma is produced, for example, in rare of molecular gases, by applying large high frequency ring discharge to the streaming gas. [..] A flame of very hot (10,000 to 12,000K) excited gas emerges…”[9]

“One of the current interests of flame plasmas in engineering problems is the magneto-hydrodynamic generation of electricity. Hydrocarbon flames are passed through a duct across which a strong magnetic field is applied. Electrodes perpendicular to the field and gas flow, but not necessarily opposite to one another, represent the poles of a generator which makes use of the principle of Faraday’s dynamo, the copper wires being here substituted by a fast-moving ionized gas (66).”[10]