Physics of the Plasma Universe by Anthony L. Peratt

“The purpose of this book is to address the growing recognition of the need for
plasma physics in astrophysics. In fact, astrophysics has contributed to the growth of
plasma physics, especially in the field of plasma waves . During the last decade, plasma physics, or more appropriately, plasma science, has witnessed an explosive
growth in two areas : pulsed-power technology and space physics. Both have led to
knowledge that is mutual and complementary, and the material in this book largely
derives from these new discoveries and their application to astrophysics. [..]

“Today plasma is recognized as the key element to understanding
the generation of magnetic fields in planets, stars, and galaxies; phenomena occurring
in stellar atmospheres, in the interstellar and intergalactic media, in radio galaxies, in quasars, and in active galactic nuclei ; and the acceleration and transport of
cosmic rays . There are convincing arguments for the view that the clouds out of
which galaxies form and stars condense are ionized : The problem of the formation
and structure of these clouds and bodies, therefore, naturally belongs to the field of
cosmic plasmas as well as astrophysics. [..]

“Together these problems form what is called The Plasma Universe, the basis for
this book . The material presented dwell s basically on the known properties of matter
in the plasma state. Some of the interesting topics in contemporary astrophysics such
as discordant redshifts and other cosmological issues are not discussed here . The
interested reader will be referred to the IEEE Transactions on Plasma Science, Special
Issues on Space and Cosmic Plasmas (December 1986, April 1989, and February 1990), and Laser and Particle Beams (August 1988). [..]

“This book is organized into eight chapters. Chapter 1 is an introduction to the
fundamental physics of cosmic plasmas . An attempt is made to review the known
properties of plasmas from the laboratory scale to the Hubble distance. Chapter 2
starts the application of basic plasma theory to astrophysical plasmas in the study o f
magnetic-field-aligned (Birkeland) currents and charged particle beams . Chapter 3
covers magnetism in plasma and the Biot-Savart force law, while Chapter 4 concen –
trates on electric fields in space and cosmic plasmas . Chapters 5, 6, and 7 survey
double layers, synchrotron radiation, and energy transport in plasmas, respectively.
Chapter 8 covers the particle-in-cell simulation of astrophysical plasmas. Found
throughout the book are examples that apply the material of the chapter or section to
specific problems.”

“In this book, we will look at many of the theories of present-day astrophysics and compare them to corresponding answers that have arisen from the study of electric plasma. But before we can propose any new alternative cosmology – a Plasma Cosmology to replace the presently “accepted” astrophysical and cosmological belief structure – we have to examine some of the basic problems inherent in those accepted ideas. Before we buy into any new way of looking at the cosmos, we need to ask, “What’s wrong with the old way?” To answer this, we must establish some fundamental guidelines about how a true science discovers knowledge. [..] A paradigm based on electric plasma, which does not find new discoveries to be enigmatic and puzzling but instead to be predictable and consistent, is slowly but surely gaining ground. “

“Chapter One begins with the evidence that the Big Bang theory is wrong, and that alternative theories, based on the study of electrically conducting gases, called plasmas, are probably right. [..]

“Chapter Two shows how the basic concepts of both the empirical and the deductive methods arose in ancient Greece and how they were tied up with the conflict between free and slave labor. [..]

“Chapter Three describes the next long swing of the pendulum — the centuries of struggle that led to the scientific revolution. [..]

“Chapters Five and Six describe how plasma cosmology grew out of the laboratory study of conducting gases and had its roots in the advancing technologies of electromagnetism. As observations have extended outward from the earth and the solar system to the galaxies and the universe as a whole, the predictions of plasma cosmology have been increasingly confirmed. [..]

“In Chapter Seven I examine how new discoveries in the nature of time show that such a cosmos can exist indefinitely without “running down.” [..]

“Chapter Eight looks at the equally profound problems that arise with the conventional ideas of matter if the Big Bang is refuted. [..]

“Finally, in Chapters Nine and Ten, we look at the impact an infinite cosmos has on religion and society.”

The aims of the present monograph may be summarized as follows:

As it is impossible to treat an extensive and complicated field like cosmic plasma physics in a rigorous way in a monograph of the present size, we have followed the policy that – as Kadomtsev (1965) puts it – “when rigour appears to conflict with simplicity, simplicity is given preference”.

“The purpose of the first edition of Cosmical Electrodynamics was to draw attention to a field of research in an early state of its development. The first four chapters of the book were devoted to the fundamental principles of plasma physics and magneto-hydrodynamics whereas the last three chapters treated applications to (what is now called) the magnetosphere and to interplanetary space, to solar physics, and to cosmic radiation. (The application to the cosmogonic problem was later treated in a separate book.)

“During the fifteen years which have elapsed since the first edition was written, the subject has been developed by two of the largest research efforts of our time: thermonuclear research has increased our knowledge of magneto-hydrodynamics and plasmas, and a major part of space research has been devoted to the exploration of the magnetohydrodynamic conditions in space around the earth.

“This has put the present authors in a difficult position with reference to a second edition. In order not to make the present book too thick we have confined ourselves to the fundamental principles which were covered by the first four chapters of the first edition. It is hoped that the applications will be covered by following books.

“One of the most important but also most difficult tasks of both thermonuclear research and the exploration of the magneto-hydrodynamics of space has been to establish a good contact between theory on one side and experiments or observations on the other. Therefore in this book the emphasis has been put on the physical more than on the mathematical aspect. The exactness of the derivation of a formula has often been sacrificed if this has been thought necessary in order to make the reading easier for scientists who concentrate on experiments or observations.”

Extract
“The experimental investigations which at first were designed to procure analogies capable of explaining phenomena on the earth, such as aurora and magnetic disturbances, were subsequently extended, as was only natural, with the object of procuring information as to the conditions under which the emission of the assumed hello-cathode rays from the sun might be supposed to take place.”

Universe – The Cosmology Quest, A film by Randall Meyers

“A group of renowned cosmologists and astrophysicist are in search of a realistic picture of the universe. Their research and observational discoveries point in a direction diametrically opposed to the predominant Bog Bang theory – this leads to a series of sociological situations that verge on the extreme dogma controls wielded against Copernicus and Galileo in the past; only now against our protagonists of the 21st century. This is a controversial science documentary touching on the nerve of everything astronomers and cosmologist claim they know about the universe today”.

All peer-reviewed and available in full online:

These specifically describe the Plasma Universe, but are not available in full online, but are all peer reviewed or refereed. 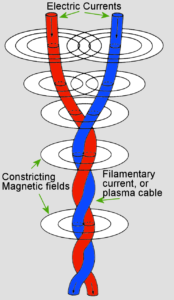