The Heliospheric current sheet (HCS) is the surface within the Solar System where the polarity of the Sun’s magnetic field changes from north to south. This field extends from the Sun’s equatorial plane throughout the entire Solar System and is the largest structure in the heliosphere.[1] The shape of the current sheet results from the influence of the Sun’s rotating magnetic field on the plasma in the interplanetary medium (Solar Wind).[2] (see also Unipolar generator). A small electrical current flows within the sheet, about 10-10 amps/m2. The thickness of the current sheet is about 10,000km.

As the Sun rotates, its magnetic field twists into a Parker spiral,[5] a form of an Archimedean spiral, named after its discovery by Eugene Parker. As the spiraling magnetic sheets changes polarity, it warps into a wavy spiral shape that has been likened to a ballerina’s skirt.[6][7] Further dynamics have suggested that “The Sun with the heliosheet is like a bashful ballerina who is repeatedly trying to push her excessively high flaring skirt downward”.[8]

The heliospheric current sheet rotates along with the Sun once every 27 days, during which time the peaks and troughs of the skirt pass through the Earth’s magnetosphere, interacting with it. Near the surface of the Sun, the magnetic field produced by the radial electric current in the sheet is of the order of 5×10-6T.[4]

The magnetic field at the surface of the Sun is about 10-4 tesla. If the form of the field were a magnetic dipole, the strength would decrease with the cube of the distance, resulting in about 10-11 tesla at the Earth’s orbit. The heliospheric current sheet results in higher order multipole components so that the actual magnetic field at the Earth due to the Sun is 100 times greater.

The electric current in the heliospheric current sheet has a radially component, the circuit being closed by currents aligned with the Sun’s magnetic field in the solar polar regions. The total current in the circuit is on the order of 3×109 amperes.[4] As a comparison with other astrophysical electric currents, the Birkeland currents that supply the Earth’s aurora are about a thousand times weaker at a million amperes. The maximum current density in the sheet is on the order of 10-10 A/m2 (10-4 amps/km2).

It has been noted that:

“It is remarkable that the radial component of the spiral structure implies a current the continually flows towards the Sun. The charge accumulating from this process must be removed elsewhere. This occurs most simply via line currents that originate over the Sun’s poles”[9]

The interplanetary electric field is caused by ions leaving the Sun, initially flowing along and parallel to the Sun’s magnetic field. But as the ions move further outwards, the azimuthal component of the Sun’s magnetic field becomes more influential, and protons are deflected to the south and electrons to the north, resulting in an electric field that compensates the magnetic forces.[10]

“The Solar Wind consists of a hot plasma — an electrically neutral mixture of electrons and ions (principally protons with some heavier atomic nuclei) at roughly 100,000°K. Its source is the Sun’s atmosphere, or corona, and it is continually present in interplanetary space. The gas flows radially outwards at a typical speed of 450km per second to at least 70 AU and probably much further. The average speed of the flowing gas is remarkably independent of its distance from the Sun”.[11]

The heliospheric current sheet was discovered by John M. Wilcox and Norman F. Ness, who published their finding in 1965 [13].

The image above is a painting by NASA artist, Werner Heil. It was developed by Prof. John Wilcox as a tool for visualizing the surface that separates the two magnetic polarity regions produced by the Sun in the solar system. His concept was that a “baseball seam” shape located near the Sun separates the two magnetic hemispheres of the interplanetary medium; the shape was determined by the large-scale magnetic field at the Sun. That geometrical shape is carried radially outward by the solar wind. As the Sun, and the magnetic field configuration it generates, continue to rotate underneath the structure, the resulting surface becomes the one you see in the painting.[14] 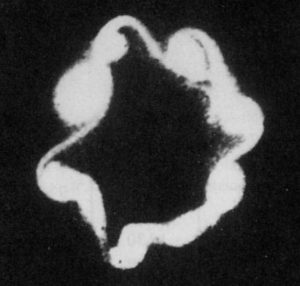