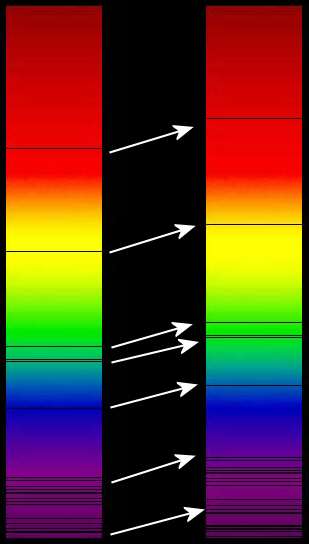 Any increase in wavelength is called “redshift”, even if it occurs in electromagnetic radiation of non-optical wavelengths, such as gamma rays, x-rays and ultraviolet. This nomenclature might be confusing since, at wavelengths longer than red (e.g., infrared, microwaves, and radio waves), redshifts shift the radiation away from the red wavelengths.

A redshift can occur when a light source moves away from an observer, corresponding to the Doppler shift that changes the frequency of sound waves. Although observing such redshifts, or complementary blue shifts, has several terrestrial applications (e.g., Doppler radar and radar guns),[1] spectroscopic astrophysics uses Doppler redshifts to determine the movement of distant astronomical objects.[2] This phenomenon was first predicted and observed in the 19th century as scientists began to consider the dynamical implications of the wave-nature of light.

Another type of redshift, the gravitational redshift (also known as the Einstein effect), is a result of the time dilation that occurs near massive objects, according to general relativity.[3]

The Wolf effect is phenomenon that occurs in several closely related phenomena in radiation physics, with analogous effects occurring in the scattering of light.[4] It was first predicted by Emil Wolf in 1987 [5] [6] and subsequently confirmed in the laboratory in acoustic sources by Mark F. Bocko, David H. Douglass, and Robert S. Knox,[7] and a year later in optic souces by Dean Faklis and George Morris in 1988 [8]. Wolf and James noted:

“Under certain conditions the changes in the spectrum of light scattered on random media may imitate the Doppler effect, even though the source, the medium and the observer are all at rest with respect to one another.[9]

The “Cosmological redshift” or expansion of the universe, is one of the most well-known redshift mechanisms, which explains the famous observation that the spectral redshifts of distant galaxies, quasars, and intergalactic gas clouds increase in proportion to their distance from the observer. This mechanism is a key feature of the Big Bang model of physical cosmology.[11]

Such theories have been proposed for many reasons, such as dissatisfaction with the explanation of cosmological redshift [3], and as an alternative interpretation of astromomical and laboratory observational data. The purpose of this article is not to judge the merit of each suggested redshift theory, nor even to judge whether they meet the criteria of a theory, model, hypothesis or other.

Critics argue that all alternative redshift theories have been contested over the years, as they produce distorted redshifted spectra. These distinctive spectral signatures also often provides a means of distinguishing the actual mechanisms involved. For example, Brillouin scattering will shift spectral lines [4] (also called a redshift, [5]), but also produce a characteristic triplet [6].

Several different names have been given to redshifts that are presumed due to alternative theories; It is noted that some of these may also be applied to accepted redshift causes. These include:

This is a selection of redshift theories that have been published over the years, that claim a cause that is not due to either Cosmological redshift (Friedmann), Doppler redshift, nor Gravitational redshift (Schwarzschild).

In 1981, Henri Reboul published a paper Untrivial redshifts – A bibliographical catalogue in which “We arbitrarily define as trivial a redshift which can be easily explained by a combination of the three following effects: Doppler, Schwarzschild, Friedmann.” (ie. Doppler, Gravitational and Cosmological reshifts). The paper includes “seven hundred and seventy-two coded references, covering 70 years of study of anomalous, i.e., untrivial redshifts (NTZ), are presented. Definitions are given for trivial Z and for the classical theories, and lists are presented for 17 classes of NTZ and 19 classes of unclassical theories”. Template:Ref

The April Meeting 2003 of The American Physics Society, a session was devoted to “Non-Doppler Redshift Mechanisms with Possible Cosmological Applications” [50], and in 2005 the Alternative Cosmology Group held the “1st Crisis In Cosmology Conference” that included papers on “Old massive galaxies at large redshifts” [51]. 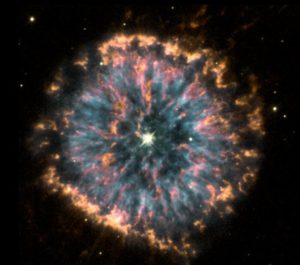