A pulsar (pulsating star) is an astronomical object which produces a regular pulse of radio waves (electromagnetic radiation) which is conventionally thought to be due to a rotating neutron star. The Plasma Universe explains pulsars as a “magnetospheric transmission line system”:

“In the three decades since their discovery, the accumulated body of observational data from pulsar sources puts constraints on models that seek to explain their periodic radiation. This paper reviews this data, reports on a VLA search for haloes predicted by an early model, and reinvestigates a magnetospheric disk–field–aligned–current transmission line system as the origin of the observed radiation, with external wave excitation by as yet an unexplained source. Three dimensional, fully electromagnetic particle–in–cell simulations of the pulsar surface and magnetosphere are used to explore the waveshape and polarization properties of the observed radiation.”[1]

Some of the key observations that Peratt and Healy make about pulsars, in the above cited paper, are as follows:

“Because of the losses in the dielectric media and in synchrotron emission, the periodicity of the propagating pulses increases. However the experiment dramatically showed that there are glitches, the flow of electron flux across the magnetosphere, can shorten the line and concomitantly the period. The fractional frequency stability scaling versus measurements interval up to about 30,000,000 s for pulsars is nearly identical to that for trapped-ion clocks. This supports the pulsar surface-magnetosphere relativistic double layer model; itself a trapped ion mechanism”

“Both simulation and experiment suggest that micro-pulses and sub-pulses are produced by particle-wave interactions in non-uniform plasma eradiated by the electromagnetic wave. This effect is produced when the magnetically insulated voltage pulse reaches the pulsar surface. Because of the curvature, magnetic insulation is lost and plasma flows across this region. This tends to create a resonating or modulating component to the proper current pulse”

“The source of the radiation energy may not be contained within the pulsar, but may instead derive from either the pulsars interaction with its environment or by energy delivered by an external circuit (Hannes Alfvén 1981).[2] This hypothesis is consistent with both the long term memory effect of the time averaged pulse and the occurrence of nulling, when no sub-pulses are observed. As noted earlier, our results support the ‘planetary magnetosphere’ view (Michael 1982)[3] where the extent of the magnetosphere, not emission points on a rotating surface [emphasis added], determines the pulsar emission.” 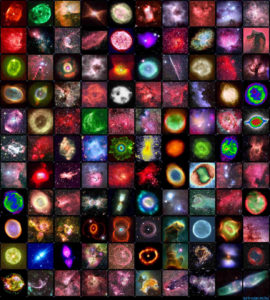