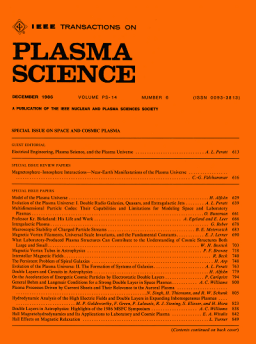 The IEEE Nuclear and Plasma Sciences Society (NPSS) is a transnational group of about 3000 professional engineers and scientists.[1] The IEEE-affiliated Society sponsors seven conferences and symposia, and two peer-reviewed journals.[2]

The IEEE is the world’s largest technical professional organization with more than 360,000 members in around 175 countries.

History of the NPSS

In 1947, the Institute of Radio Engineers (IRE) formed the Nuclear Studies Committee to assess the role of the IRE in the field. Two years later, the Professional Group on Nuclear Science was formed. In 1954 the first issue of the Transactions on Nuclear Science appeared, increasing to four issues per year in 1956.

In 1972, the scope of the group was widened to include plasma sciences, and the group became a Society, it’s name changing to the Nuclear and Plasma Sciences Society.[3]

The first issue of the Transactions on Nuclear Science first appeared in 1954, the number of issues rising to four per year in 1956. In 2005, the journal was ranked No.3 for impact factor in Nuclear Science & Engineering by Thomson.[4]
(Web site)

The first issue of the Transactions on Plasma Science appeared in 1973. The ‘Tennessee Orange,’ cover color was picked by Igor Alexeff, Professor, University of Tennessee, Knoxville.[5] Published bimonthly, its scope includes all aspects of the theory and application of plasma science, and regularly features “Special issues” (eg. eight in 2004). [6] Between 2000-2004, the journal was ranked No.10 for impact factor in “Physics – Fluids & Plasmas” by Thomson.[7] (Web site) The journal insists on having peer reviewed manuscripts.[5]

The journal encourages papers on the imaging of body structures, usually in situ, rather than microscopic biological entities.[8] In the Journal Citation Reports (JCR) from Thomson, which ranks journals by their impact factor, in 2005, the journal was ranked:[4]

Areas of technical activity include:[9]