Klein-Alfvén Cosmology (sometimes Alfvén-Klein cosmology,[1] and also “symmetric cosmology”[2]) is based on work by Oskar Klein, on a universe containing equal amounts of matter and antimatter, that was further developed with Hannes Alfvén. The Professor of history of science and technology at the University of Aarhus, Helge Kragh,[3] writes:

“Developing ideas due to his senior colleague, the theoretical physicist Oskar Klein, he [Hannes Alfvén] arrived in the early 1960s at a cosmological view which differed from both big-bang and steady-state cosmology… Klein and Alfvén rejected the big-bang theory, which they found unscientific and mythical. [..]
“The characteristic feature of the cosmological view of Klein and Alfvén was that it assumed a universe with equal amounts of matter and antimatter separated by cosmic electromagnetic fields. Ordinary matter was called “koinomatter,” and for a plasma of both koinomatter and antimatter Alfvén coined the name “ambiplasma”. [..]
“It was ignored by most astronomers and cosmologists”.[4]

“As a consequence of Dirac’s theory, Oskar Klein (1966,[5] 1971 [6]) suggested that the Universe might be matter–antimatter symmetric [..] The Plasma Universe model introduces important new arguments in this discussion.”[7]

After work by Oskar Klein (1894-1977)[8] [9] [10] [11], collaboration with Hannes Alfvén further investigated the merits of a cosmology in which the universe might be matter-antimatter symmetric.[12]

“Klein (1953, 1958, 1961, 1962) put forward a theory on the development of the metagalaxy which formed the basis of the concept that the initial state of the Universe was made up of a thin ambiplasma consisting of equal amounts of ionized matter and antimatter. This approach was developed by Alfvén and Klein (1962) and Alfvén (1965) who questioned the plausibility of asymmetry inherent in the big bang model of the Universe. To explain the lack of symmetry, it was considered necessary either to invoke a new physical law of nature or to assume the presence of asymmetry at time –∞. Since none of these alternatives appeared feasible (cf. Stecker, 1981, however), several authors adopted a general approach of symmetric cosmology (Alfvén, 1965, 1967, 1975a, b; Alfvén and Klein, 1962; Alfvén and Elvius, 1969; Bonnevier, 1964; Carlquvist and Laurent, 1976a, b; Ekspong et al., 1966; Harrison, 1967, 1968; Klein, 1966; Laurent and Söderholm, 1969; Lehnert, 1977, 1978; Omnès, 1971; Sofia and Van Horn, 1974; Thompson, 1978; Vincent, 1976). If such an approach appears to be desirable, it is also imperative to look for evidence for the existence of antimatter in the Universe. A number of authors have examined the question of presence of antimatter in the Universe. Alfvén (1978) argued that the kinetic energy presently associated with the Hubble expansion is so enormous that matter-antimatter annihilation appears to be the most likely source. Alfvén (1979) also regarded matter-antimatter annihilation to be most important single mechanism which can account for the large release of energy in quasi-stellar objects (QSOs).”[13]

“.. construct a universe such that: i) It is essentially matter-antimatter symmetric; ii) the Hubble expansion is caused by well-known processes (among them, energy release by annihilation) in a region of 109 light years (a bigger “Big Bang”); iii) it does not contain large quantities of missing mass; and iv) it is highly inhomogeneous and has a cellular structure.”[14]

“..we do not know enough to exclude a Dirac Klein symmetry. On the other hand there is no decisive observational argument in favour of antimatter. (In Chapter VI of Cosmic Plasma this problem is discussed in some detail.) Hence it must be considered legitimate to study the consequences of both hypothesis; the Plasma Universe is symmetric or it consists of exclusively ordinary matter.[15]

“Oskar Klein (Alfven and Klein, 1963) has suggested a cosmology often referred to as the symmetric cosmology, according to which there should be equal amounts of koinomatter and antimatter in the universe”.[16]

In his 1993 book, theoretical cosmologist Jim Peebles criticized the cosmology of Klein (1971)[17], and Alfvén’s 1966 book, Worlds-Antiworlds,[18] writing that “there is no way that the results can be consistent with the isotropy of the cosmic microwave background radiation and X-ray backgrounds”[19]

“An approximate treatment of the Alfvén-Klein metagalaxy is presented with a view of determining whether this cosmology could account for the background black-body radiation in the Universe. It is shown that no non-rotating cosmological model of this type would have been able to establish a black-body radiation field at the epoch of minimum radius and then re-expand to infinity”[20] 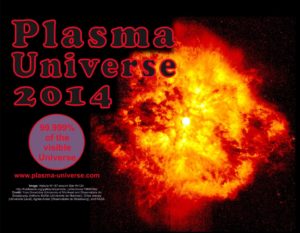