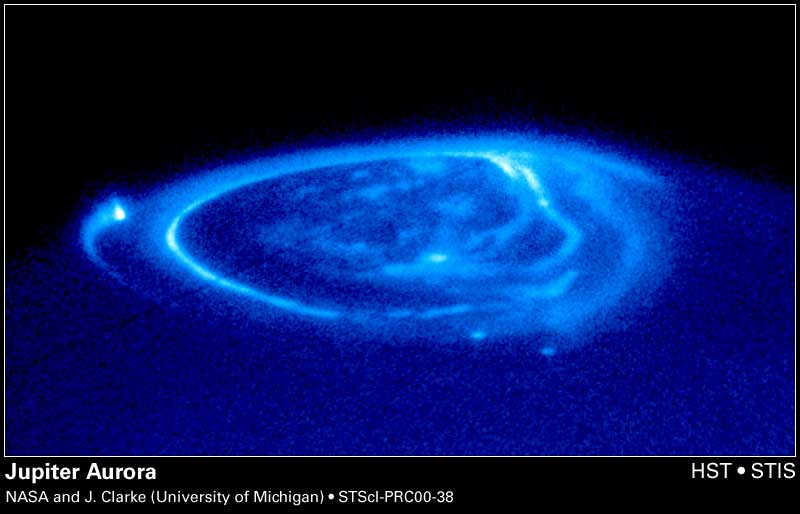 The aurora on Jupiter,[1] powered by Jovian Birkeland currents.[2] Source/credit

Originally Birkeland currents referred to electric currents that contribute to the aurora, caused by the interaction of the plasma in the Solar Wind with the Earth’s magnetosphere. The current flows earthwards down the morning side of the Earth’s ionosphere, around the polar regions, and spacewards up the evening side of the ionosphere. These Birkeland currents are now sometimes called auroral electrojets. The currents were predicted in 1903 by Norwegian explorer and physicist Kristian Birkeland, who undertook expeditions into the Arctic Circle to study the aurora.

Professor Emeritus of the Alfvén Laboratory in Sweden, Carl-Gunne Fälthammar wrote (1986): “A reason why Birkeland currents are particularly interesting is that, in the plasma forced to carry them, they cause a number of plasma physical processes to occur (waves, instabilities, fine structure formation). These in turn lead to consequences such as acceleration of charged particles, both positive and negative, and element separation (such as preferential ejection of oxygen ions). Both of these classes of phenomena should have a general astrophysical interest far beyond that of understanding the space environment of our own Earth.”

Auroral Birkeland currents can carry about 1 million amperes.[4] They can heat up the upper atmosphere which results in increased drag on low-altitude satellites.

“Voyager 2 also detected auroras similar to those on Earth, but Neptune’s registered 50 million watts, compared to Earth’s 100 billion watts and occurred over wide regions of the planet’s surface.”[5]

Birkeland currents can also be created in the laboratory with multi-terawatt pulsed power generators. The resulting cross-section pattern indicates a hollow beam of electron in the form of a circle of vortices, a formation called the diocotron instability[6] [7] (similar, but different to the Kelvin-Helmholtz instability), that subsequently leads to filamentation. Such vortices can be seen in aurora as “auroral curls”.[8]


Electrons moving along a Birkeland current may be accelerated by a plasma double layer. If the resulting electrons approach relativistic velocities (ie. the speed of light) they may subsequently produce a Bennett pinch, which in a magnetic field will spiral and emit synchrotron radiation that includes radio, optical (ie. light), x-rays, and gamma rays.

In 2007, the Themis satellite “found evidence of magnetic ropes connecting Earth’s upper atmosphere directly to the sun”.[10] apparently consistent with Kristian Birkeland‘s theory of the aurora, “that a current of electric corpuscles from the sun would give rise to precipitation upon the earth” (See preface to The Norwegian Aurora Polaris Expedition 1902-1903).

“Plasma cables seem to be reasonably stable formations which can be considered as structures important for the understanding of plasma phenomena. (Of course, their interior structure should be described by classical theory.) The plasma cables are either filaments or ‘flattened filaments’ (sheets with limited extent). They carry an electric current parallel to the magnetic field, and this is what gives them their properties. The cables are often very efficient in transferring electromagnetic power from one region to another. They are embedded in passive plasmas, which have essentially the same properties in all directions around the cables. They are ‘insulated’ from their surroundings by a thin cylindrical electrostatic sheath (or double layer) which reduces the interaction with its exterior. In the magnetosphere and upper ionosphere, the density in the cable is sometimes lower than the surrounding passive plasma (Block and Fälthammar, 1968)[11]. In other cases, the density in the cable may be much larger than the surroundings because ionized matter is pumped into the cable from the outside. By selectively doing so, the chemical composition in the cable may differ from that of its exterior (Marklund, 1978, 1979)[12] (see Marklund convection). Besides the cylindrical electrostatic sheath, there are often longitudinal double layers, in which a considerable part of the power which the cable transmits may be converted into high energy particles. The double layers sometimes explode, and this produces excessively high energy particles.” [13]

Plasma physicists suggest that many structures in the universe exhibiting filamentation are due to Birkeland currents. Peratt notes that “Regardless of scale, the motion of charged particles produces a self-magnetic field that can act on other collections of charged particles, internally or externally.[15] Plasmas in relative motion are coupled via currents that they drive though each other“. (See Plasma scaling). Examples include:


The history of Birekland Currents appears to mired in politics.[17]

After Kristian Birkeland suggested “currents there are imagined as having come into existence mainly as a secondary effect of the electric corpuscles from the sun drawn in out of space,” (1908), his ideas were generally ignored in favour of an alternative theory from British mathematician Sydney Chapman.

In 1939, the Swedish Engineer and plasma physicist Hannes Alfvén promoted Birkeland’s ideas in a paper published on the generation of the current from the Solar Wind.[18] One of Alfvén’s colleagues, Rolf Boström, also used field-aligned currents in a new model of auroral electrojets (1964).[19]

In 1966 Alfred Zmuda, J.H. Martin, and F.T.Heuring reported their findings of magnetic disturbance in the aurora, using a satellite magnetometer, but did not mention Alfvén, Birkeland, or field-aligned currents, even after it was brought to their attention by editor of the space physics section of the journal, Alex Dressler.[20]

In 1967 Alex Dessler and one of his graduates students, David Cummings, wrote an article arguing that Zmuda et al had indeed detected field align-currents.[21] Even Alfvén subsequently credited (1986) that Dessler “discovered the currents that Birkeland had predicted” and should be called Birkeland-Dessler currents.[22]

In 1969 Milo Schield, Alex Dessler and John Freeman, used the name “Birkeland currents” for the first time.[23] In 1970, Zmuda, Armstrong and Heuring wrote another paper agreeing that their observations were compatible with field-aligned currents as suggested by Cummings and Dessler, and by Bostrom, but again made no mention of Alfvén and Birkeland.[24]

In 1970, a group from Rice University also suggested that the results of an earlier rocket experiment was consistent with field-aligned currents, and credited the idea to Boström, and Dessler and his colleagues, rather than Alfvén and Birkeland.[25] In the same year, Zmudu and Amstrong did credit Alfvén and Birkeland, but felt that they “…cannot definitely identify the particles constituting the field-aligned currents.”[26]

It wasn’t until 1973 that the navy satellite Triad, carrying equipment from Zmuda and James Armstrong, detected the magnetic signatures of two large sheets of electric current. Their papers (1973, 1974) reported “more conclusive evidence” of field-aligned currents, citing Cummings and Dessler but not mentioning Birkeland or Alfven.[27]

It had taken 65 years to confirm Birkeland’s original predictions. 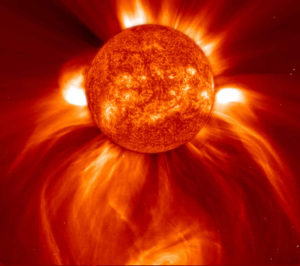