A classic glow discharge in a Crookes tube Source

Electric glow discharge is a type of plasma formed by passing a current at 100 V to several kV through a gas, usually argon or another noble gas. It is found in products such as fluorescent lights and plasma-screen televisions, and is used in plasma physics and analytical chemistry, and has been proposed as an alternative method by which stars produce their visible spectra.[1]

The glow discharge owes its name to the fact that plasma is luminous, the luminosity is produced because the electrons gain sufficient energy to generate visible light by excitation collisions which generate photons. This phenomenon is most easily achieved by the interaction of an anode and cathode, which generates the complex current circuit that produces the glow. Involved in the formation of glow discharges are the formation of restricted electric fields and plasma sheaths at each of the electrodes. Ionization also has to be a critical part of a glow discharge in an equilibrium condition, as there will be a continuos loss of ions from any set component of the system at any given time, which needs to be balanced by an equivalent gain.

The simplest type of glow discharge is a direct-current glow discharge. In its simplest form, it consists of two electrodes in a cell held at low pressure (1–10 torr). The cell is typically filled with argon. A potential of several hundred volts is applied between the two electrodes. A small population of atoms within the cell is initially ionized through random processes (collisions between atoms or with alpha particles, for example). The ions (which are positively charged) are driven towards the cathode by the electric potential, and the electrons are driven towards the anode by the same potential. The initial population of ions and electrons collides with other atoms, ionizing them. As long as the potential is maintained, a population of ions and electrons remains.

Some of the ions’ kinetic energy is transferred to the cathode. This happens partially through the ions striking the cathode directly. The primary mechanism, however, is less direct. Ions strike the more numerous neutral gas atoms, transferring a portion of their energy to them. These neutral atoms then strike the cathode. Whichever species strike the cathode, collisions within the cathode redistribute this energy until a portion of the cathode is ejected, typically in the form of free atoms. This process is known as sputtering. Once free of the cathode, atoms move into the bulk of the glow discharge through drift and due to the energy they gained from sputtering. The atoms can then be collisionally excited. These collisions may be with ions, electrons, or other atoms that have been previously excited by collisions with ions, electrons, or atoms. Once excited, atoms will lose their energy fairly quickly. Of the various ways that this energy can be lost, the most important is radiatively, meaning that a photon is released to carry the energy away. In optical atomic spectroscopy, the wavelength of this photon can be used to determine the identity of the atom (that is, which chemical element it is) and the number of photons is directly proportional to the concentration of that element in the sample. Some collisions (those of high enough energy) will cause ionization. In atomic mass spectrometry, these ions are detected. Their mass identifies the type of atoms and their quantity reveals the amount of that element in the sample.

The figure above shows the main regions that may be present in a glow discharge. Regions described as “glows” emit significant light; regions labeled as “dark spaces” do not. As the discharge becomes more extended (i.e., stretched horizontally in the geometry of the figure), the positive column may become striated. That is, alternating dark and bright regions may form. Relatedly, compressing the discharge horizontally will result in fewer regions. The positive column will be compressed while the negative glow will remain the same size, and, with small enough gaps, the positive column will disappear altogether. In an analytical glow discharge, the discharge is primarily a negative glow with dark region above and below it.

The voltage current characteristic of a glow discharge is highly non-linear, as are many plasma phenomenon, and ordinary linear physics can not be applied to explain their struture. For a basic DC glow discharge, three main regions can be distinguished from each other, dark discharge, glow dicharge and arc discharge. 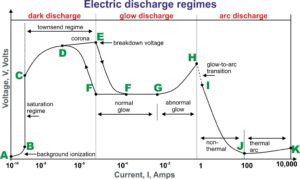 The regime between A and E on the voltage-current characteristic is termed a dark discharge because, except for corona discharges and the breakdown itself, the discharge remains invisible to the eye.

The glow discharge regime owes its name to the fact that the plasma is luminous. The gas glows because the electron energy and number density are high enough to generate visible light by excitation collisions. The applications of glow discharge include fluorescent lights, dc parallelplate plasma reactors, “magnetron” discharges used for depositing thin films, and electrobombardment plasma sources.

The properties of glow discharges have been suggested as an ideal way to create fusion energy, and some fusion techniques have been developed to utilise the properties and various modes of operation of glow discharges as a vital component in this process. The most notable of which is Inertial-Electrostatic Confinement Fusion (IECF). In this process, fuel ions are trapped with purely electrostatic fields in a convergent geometry, as opposed to magnetic confinement and other similar more popular methods. The inventor of this concept was U.S. scientist Philo Farnsworth, who came up with the idea in the 1950’s. Other variations on this include the Polywell concept,[3] the Penning trap,[4] the Perodically Oscillating Plasma Sphere (POPS),[5] and multi-electrode (#electrodes >2) devices.[6] All of these devices include some feature that make them more complex than the simple two electrode glow discharge devices, often with the intention of circumventing some of the loss mechanisms associated with IECF devices.

An Inertial-Electrostatic Confinement Fusion (IECF) neutron/proton source is a compact device of simple configuration based on
the properties of the glow discharge.[8] It basically consists of a transparent hollow cathode at the center of a spherical vacuum chamber (serves as an anode), usually filled with a D2 fuel gas, and a glow discharge takes place between them. The resulting high-energy ions interact with the background gas (beam-background collisions) and themselves (beam-beam collisions) in a small volume around the center spot, resulting in a high rate of fusion reactions. The result is a neutron generator producing neutrons on the order of 106-108 neutrons per second. In devices using even higher injection rates, the injected ions may provide a deep self-generated potential well that confines trapped beam ions, creating even higher reaction rates. The device may be modified by using a fill gas mixture of deuterium and helium-3 to be a source of protons as well as neutrons. IECF also has promising applications for landmine detection. [7]

Modes of operation associated with IECF

The glow discharge in IECF machines can be categorized according to four distinctive discharge modes. These are the Central Glow mode, the Star mode, the Halo mode, and the Jet mode. The names are descriptive of the visual appearances of the light emitted from the discharges. Each mode is associated with a different potential well structure, hence neutron production rate, for given operating parameters. Each requires a unique combination of operating parameters, i.e, voltage, current, pressure and grid parameters.[9]