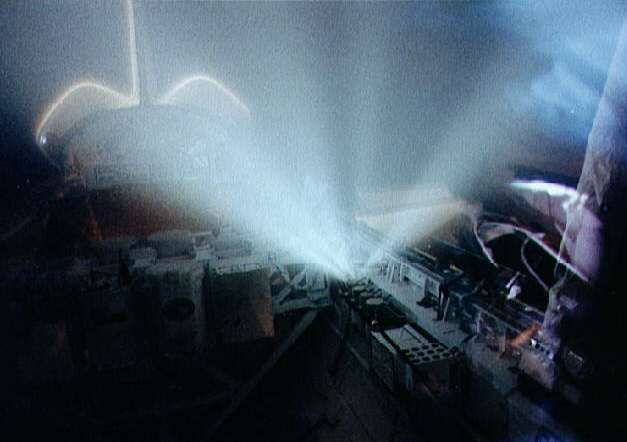 The phenomenon was predicted by Swedish engineer and plasma scientist, Hannes Alfvén, in connection with his model on the origin of the Solar System (1942)[1][2][3]. At the time, no known mechanism was available to explain the phenomenon, but the theory was subsequently demonstrated in the laboratory,[4]. Subsequent research by Brenning and Axnäs (1988)[5] have suggested that a lower hybrid plasma instability is involved in transferring energy from the larger ions to electrons so that they have sufficient energy to ionize. Application of the theory to astronomy though a number of experiments have produced mixed results [6] [7].

The Royal Institute of Technology in Stockholm carried out the first laboratory tests, and found that (a) the relative velocity between a plasma and neutral gas could be increased to the critical velocity, but then additional energy put into the system then went into ionizing the neutral gas, rather than into
increasing the relative velocity, (b) the critical velocity is roughly independent of the pressure and magnetic field. [10].

In 1970, the Apollo XIII mission provided indirect evidence of the critical velocity phenomenon:

“The fact that the critical velocity phenomenon occurs even in space plasma was discovered by an accident in the context of the Apollo program. When Apollo XIII had to return to Earth prematurely after an accident, the carrier rocket continued toward the Moon. When it hit the lunar surface with great force, dust and gas clouds were formed, which expanded out into the solar wind. Instruments left on the lunar surface by Apollo XII then showed a strongly enhanced flux of energetic ions. These were ions which were formed from the neutral gas cloud and subsequently accelerated in the electric field of the solar wind. The acceleration was expected, but what was surprising was that such a large part of the neutral gas cloud had become ionized. Analysis showed that the only explanation appeared to be the critical velocity phenomenon. (The solar wind velocity, 300 — 900 km/s, exceeds greatly the critical velocity for all ion species concerned.)”[11][12]

In 1973, Lars Danielsson published a review of critical ionization velocity, and concluded that the existence of the phenomenon “is proved by sufficient experimental evidence”[13]. In 1976, Alfvén reported that “The first observation of the critical velocity effect under cosmic conditions was reported by Manka et al. (1972)[14] from the Moon. When an abandoned lunar [391] excursion module was made to impact on the dark side of the Moon not very far from the terminator, a gas cloud was produced which when it had expanded so that it was hit by the solar wind gave rise to superthermal electrons.”[15]

In the laboratory, critical ionization velocity has been recognised for some time, and is seen in the penumbra produced by a dense plasma focus device (or plasma gun). Its existence in cosmic plasmas has not been confirmed.

In 1986, Gerhard Haerendel, suggested that critical velocity ionization may stabilize the plasma flow in a cometary coma,[16]. In 1992, E. Golbraikh and M. Filippov argued that critical ionization velocity could play a role in coronal mass ejections and solar flares [17], and in 1992, Anthony Peratt and Gerrit Verschuur suggested that interstellar neutral hydrogen emissions bore the signature of critical velocity ionization,[18].

A 2001 review of the phenomenon by Shu T. Lai reports that “.. laboratory experiments, and computer simulations have all shown CIV as feasible and reasonably understood, although all CIV experiments in space have yielded negative results with perhaps three exceptions”[19]. Also in 2001, C. Konz, et al, “.. discuss the critical velocity effect as a possible explanation for the observed Hα emission [..] in the Galactic halo near the edges of cold gas clouds of the Magellanic Stream”[20]

In 2007, radio astronomer Gerrit Verschuur reported a study “which strongly suggests the existence of a mechanism in interstellar space in which the CIV effect influences the motion of neutral hydrogen atoms.”[21]. And and investigation by physicist Valentin A. Rantsev-Kartinov on whether planets are located on dusty filaments, concluded that:

“The data presented show that the structure of cosmic dust clouds has a skeletal or concentric cylindrical filamental structure similar to the skeletal found in carbonaceous dust particles in the dusty plasma associated with laboratory discharge experiments. The consequences of this discovery corroborate both the role of the CIV mechanism in the accretion of solid bodies from dusty plasma as well as the observation of SSs in the interstellar plasma medium.”[22]

Mathematically, the critical ionization velocity of a neutral cloud, that is, when the cloud begins to become ionized, is when the relative kinetic energy is equal to the ionization energy, that is:

where eVion is the ionization potential of the atoms or molecules in the gas cloud, m is the mass, v is the velocity.

Alfvén considered a neutral gas cloud entering the Solar System, and noted that a neutral atom will fall towards the Sun under the influence of gravity, and its kinetic energy will increase. If their motion is random, collisions will cause the gas temperature to rise, so that at a certain distance from the Sun, the gas will ionize. Alfvén writes that the ionization potential of the gas, Vion, occurs when:

that is, at a distance of:

(where ri is the ion distance from the Sun of mass M, m’ is the atom weight, Vion is in volts, k is the gravitational constant). Then when the gas becomes ionized, electromagnetic forces come into effect, of which the most important is the magnetic force which is usually greater than the gravitatioal force which gives rise to a magnetic repulsion from the Sun. In other words, a neutral gas falling from infinity toward the Sun is stopped at a distance ri where it will accumulate, and perhaps condense into planets.

Alfvén found that by taking a gas cloud with an average ionisation voltage of 12V, and average atomic weight of 7, then the distance ri is found to coincide with the orbit of Jupiter.

Alfvén concluded that the critical velocity Vcrit at which neutral gas atoms of mass ma, with an ionization potential of eVion, interacts strongly with a magnetized plasma is:

Alfvén discusses his thoughts behind critical velocity, in his NASA publications Evolution of the Solar System, [24].. After criticising the “Inadequacy of the Homogeneous Disc Theory”, he writes:

“.. it is more attractive to turn to the alternative that the secondary bodies derive from matter falling in from “infinity” (a distance large compared to. the satellite orbit). This matter (after being stopped and given sufficient angular momentum) accumulates at specific distances from the central body. Such a process may take place when atoms or molecules in free fall reach a kinetic energy equal to their ionization energy. At this stage, the gas can become ionized by the process discussed in sec. 21.4; the ionized gas can then be stopped by the magnetic field of the central body and receive angular momentum by transfer from the central body as described in sec. 16.3.”.

On the basis of the experiments it has been possible to essentially clarify what happens (Raadu 1978)[25]: When the relative velocity between plasma and neutral gas reaches the critical velocity, an instability occurs which leads to strong electric field fluctuations, which transfers energy from the relative motion (between ions and neutral gas) to the electrons of the plasma. These can now in turn easily ionize the neutral gas particles. In order to trigger the instability it is sufficient that there exists the slightest ionization (e.g. as a result of cosmic radiation), which then grows like an avalanche. Certain problems remain, however, still to be solved (Brenning and Axnas 1988)[5].[26]