The heliospheric current sheet results from the influence of the Sun's rotating magnetic field on the plasma in the interplanetary medium [1]. The wavy spiral shape has been likened to a ballerina's skirt, and carries a tiny 10-10 A/m2

An astrophysical plasma is a plasma (an ionised gas) found in astronomy whose physical properties are studied in the science of astrophysics. The vast majority of the volume of the universe is thought to consist of plasma, a state of matter in which atoms and molecules are so hot, that they have ionized by breaking up into their constituent parts, negatively charged electrons and positively charged ions. Although influenced by gravity, because the particles are charged, they are also strongly influenced by electromagnetic forces, that is, by magnetic and electric fields.

All known astrophysical plasmas are magnetic. They also contain equal numbers of electrons and ions so that they are electrically neutral overall. And because plasmas are highly conductive, any charge imbalances are readily neutralised. However, because plasma phenonenon are very complex, charge imbalances can occur, resulting in a characteristic known as quasineutrality. An example is the influence of our Sun’s magnetic field on the electrons and ions in the interplanetary medium (or Solar wind) resulting in the heliospheric current sheet, the largest structure in the Solar system.

Space plasma pioneers Hannes Alfvén and Carl-Gunne Fälthammar divided cosmic plasmas into three different categories (note that other characteristics of low-particle-density interstellar and intergalactic plasmas, means that they are characterised as medium density):

Alfvén and Fälthammar noted that the:

“table shows some features of interest. The first is that most densities are to be considered as very high. Except in the close vicinity of the earth there is no analogy to high-vacuum phenomena. The laboratory analogy of cosmic space is not the vacuum in a tank but a highly ionized gas of a very high density.

“Still more striking than the high densities are the very strong magnetic fields in the cosmos. In fact they are so strong that at present our laboratory resources do not suffice to produce field strengths large enough for model experiments.

“The powerful magnetic fields have two important consequences. The first is that the motion of charged particles is usually of a different type from that we are familiar with in the laboratory. The radius of curvature is very small and the particles more in the direction of the magnetic field or ‘drift’ perpendicular to it. [..]

“Finally, the time-scale transformation in [the] Table is of interest. Solar flares, coronal arcs, and also the initial phase of a magnetic storm should be regarded as very short-lived phenomena. In fact their equivalent duration is of the order of the ignition time of an electric discharge. This means that transient phenomena are very important in cosmical physics”.[2]

Astrophysical plasma may be studied in a variety of ways since they emit electromagnetic radiation across a wide range of the electromagnetic spectrum. For example, cosmic plasmas in stars emits light as can be seen by gazing at the night sky. And because astrophysical plasmas are generally hot, (meaning that they are fully ionized), electrons in the plasmas are continually emitting X-rays through a process called bremsstrahlung, when electrons nearly collide with atomic nuclei. This raditation may be detected with X-ray observatories, performed in the upper atmosphere or space, such as by the Chandra X-ray Observatory satellite. Space plasmas also emit radio waves and gamma rays.

In his summary of low-density plasmas, Fälthammar notes that:[3]

“Low-density plasmas fill the rest of the universe; i.e., they dominate planetary magnetospheres, the solar corona, and interplanetary, interstellar, and intergalactic space. They represent a very complicated state of matter which can entertain a host of waves and instabilities. Their electrodynamic properties are such that in general there does not even exist a local macroscopic relation between the electric field and electric current density. For example, finite electric current may coexist with a zero electric field, and vice versa. This means that the concept of conductivity as a local property becomes meaningless, and even remote parts of the current circuit must be taken into account.

“A simple example is that discussed in [7, sec. 5.1.31; namely, of electrons and ions trapped between two magnetic mirrors and having different angular distributions, and hence differently distributed mirror points. Even if the total charge is zero, the electrons and ions contribute differently to the local charge density, and hence they maintain an electric field without any net current. This example has been elaborated in greater detail in [42][4]. A case of experimentally observed magnetic-field-aligned electric fields in a magnetic mirror with no electric current has been reported in [38][5].” [See footnotes for quoted references, 40 and 38]

In 1913, Norwegian explorer and physicist Kristian Birkeland may have been the first to predict that space is not only a plasma, but also contains “dark matter“. He wrote: “It seems to be a natural consequence of our points of view to assume that the whole of space is filled with electrons and flying electric ions of all kinds. We have assumed that each stellar system in evolutions throws off electric corpuscles into space. It does not seem unreasonable therefore to think that the greater part of the material masses in the universe is found, not in the solar systems or nebulae, but in “empty” space. [6]

In 1937, when interstellar space was thought to be a vacuum, plasma physicist Hannes Alfvén argued that if plasma pervaded the universe, then it could carry electric currents that could generate a galactic magnetic field. During the 1940s and 50s, Alfvén developed magnetohydrodynamics (MHD) which enables plasmas to be modelled as waves in a fluid, for which Alfvén won the 1970 Nobel Prize for physics. MHD is a standard astronomical tool.

“It should be noted that the fundamental equations of magnetohydrodynamics rest on the assumption that the conducting medium can be considered as a fluid. This is an important limitation, for if the medium is a plasma it is sometimes necessary to use a microscopic description in which the motion of the constituent particles is taken into account. Examples of plasma phenomena invalidating a hydromagnetic description are ambipolar diffusion, electron runaway, and generation of microwaves”.

In 1974, Alfvén’s theoretical work on field-aligned electric currents in the aurora, based on earlier work by Kristian Birkeland, was confirmed by satellite, and Birkeland currents were discovered. In his later years, Alfvén was known for highlighting the importance of treating astrophysical plasmas in a proper theoretical fashion [7] He wrote: 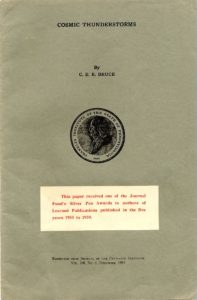